KCAL is “On the Air” 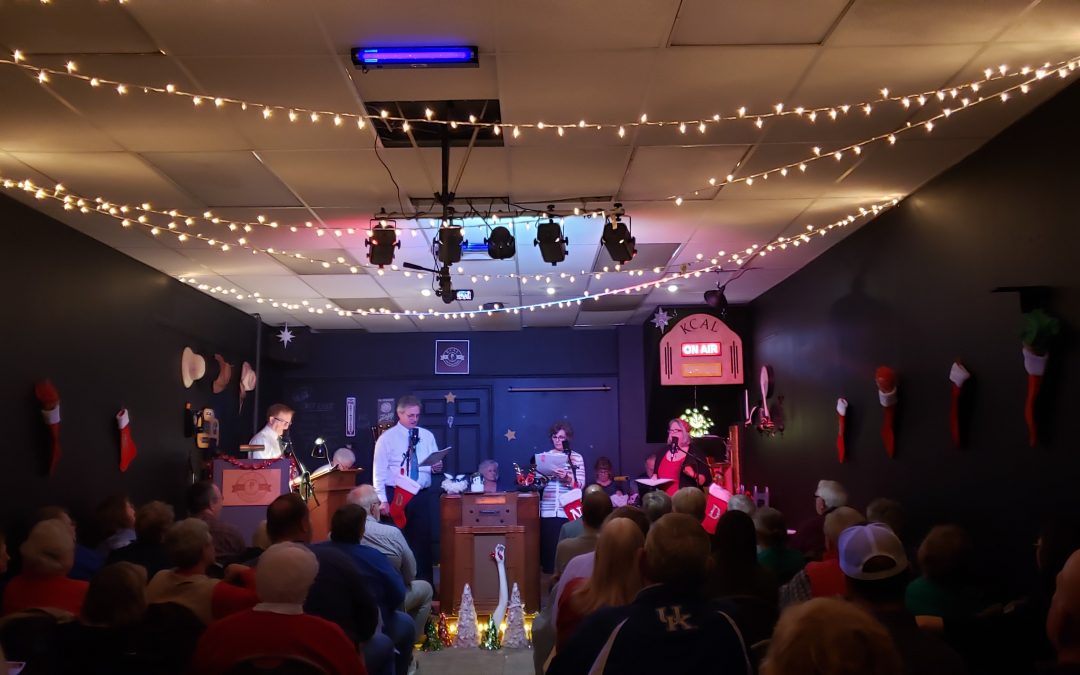 Underneath the glow of a ceiling crisscrossed with twinkle lights, the audience expectantly waits for the show to begin.

Cast member Roger Garrison sets the holiday mood. Standing by an old radio, he croons “White Christmas” while the rest of the cast and crew sit on stage at the ready. Hovering above our heads, stage left is a sign that lights up with the words, “On the Air.”

Cue drum roll and music. The “Applause” sign blinks, and the audience responds in kind. The KCAL Old Time Christmas Radio Show is underway. Long forgotten is the cold weather and grey skies outside. Who would know that out there in the rest of the world it’s 2019?

Our announcer, Buddy Teater, delivers his opening lines: “And, now—from Hollywood: ‘Romance!’ ‘Romance’ transcribed stories of love and adventure, of comedy and crisis, of conflict and human emotion. Today, a story of Christmastime, of Christmas present starring Denise Cline as Evelyn in ‘Richer by One Christmas.’”

Cline steps up to the microphone with script in hand and, in a perfect 1940s-style cadence, begins to set up the story. With exaggerated footsteps and sound effects, actor David Damron walks up to another microphone to portray Evelyn’s incorrigible eleven-year-old son, Peter.

The playbill informs us that the “Romance” storyline was a 30-minute filler show which ran for twelve years between 1943 and 1956, and was sometimes a substitute for popular favorites like Gunsmoke or Life with Luigi.

Amid dinnertime clanking of silverware on a plate, Billy Holland, cast as the father, joins in the story, which brings us to Christmas present and more memories while the familiar sound of carolers singing and the ring-ring-ring of the salvation army bell envelop the audience. Cast and crew talk amongst themselves creating an atmosphere of holiday shoppers in the background.

The instant camaraderie among the cast is palpable and they easily connect with the audience. Cline later says. “We don’t want you to just come to see it; we want you to be it, too.” There is a genuine feeling that we are a part of the show, not just flies on the wall. The actors include us in the onstage dialogue with all-knowing glances and relatable humor.

As the music plays in the background, one by one, the actors resume their place, and we are pulled back into the story.

“And now, from the entire cast of our series and from all of us here at Romance, we wish you all a very Merry Christmas and may we invite you to tune in next week for the next series of ‘Romance.’ This is the NBC Radio Network. Bing-bing-bing.”

The lights come up for intermission, and the KCAL Troupe invites everyone into the lobby for complimentary snacks made by David Damron’s wife—peanut butter fudge, white chocolate drizzled popcorn, and miniature red velvet cupcakes, to name a few. The audience members are all smiles and continue to buzz with quiet conversation when the lights overhead flash twice signaling the second half of the show. We make our way back into the theater and take our seats for a holiday-themed episode of “Father Knows Best.”

Ladies and gentlemen now might be a good time for a flashback to find out more about how KCAL’s story began.

“Our county loves the performing arts,” Doug Fain says proudly. He should know. He is KCAL’s producer and director, finds all the scripts, organizes the sound effects and musical soundtracks, and casts each role.

Fain, a Nicholasville native, wears a lot of hats. Not only is he Jessamine County’s County Circuit Clerk, but he also hosts a weekday morning show on WNJK 105.9, manages the 6,000 member-strong Facebook group, “You Grew Up in Jessamine County,” and has a popular local-interest radio show each Saturday (also on WNJK) called “All Things Jessamine.” He was the sports announcer for Jessamine County High School for forty years, remains involved in numerous civic and philanthropic groups in the county, and at one time was even a local funeral director and embalmer.

Local attorney, Connie Grayson, spearheaded the Jessamine County Creative Arts League and during her tenure, she rented a building on Main Street to host gallery events and arts-related activities. By 2014, the Arts League already had two old time radio show performances under their belt, with a different director at the helm. Fain offered to lend a hand with the coordination of the performances and also enlisted the help of Norman and Denise Cline.

Fain and Denise Cline go way back, not only being ‘Nicholasvillians’ from birth but also community theater colleagues. Their continued support and involvement in community theater productions motivated their decision to take the reins from Grayson and keep the old-time radio show alive and kicking.

With that, they formed KCAL’s Jessamine County Old Time Radio Troupe, out of a passionate group of eighteen friends—from a retired school teacher or two, a chaplain, a corporate pilot, and even the Chief Financial Officer at Farmers Bank—the troupe is a true reflection of the community and who all share a genuine love of live theater.

K-C-A-L are the fictitious call letters of the old-time radio station that ‘broadcasts’ their performances. It pays homage to the original Creative Arts League, and “since we’re not a real radio station, we put the ‘K’ on the front, so it’d kind of stand for Kentucky,” Cline says.

But, it wasn’t as easy as all that.

Four years later, Grayson decided to bow out and told Fain she would be closing the Arts League. He called an emergency meeting to feel out the situation and see if they could produce old time radio show performances on their own.

Taking over the Arts League building permanently was going to take some doing. The Troupe needed money for renting the space as well as insurance, utilities, and incidentals. Fain sent up a flare on Facebook that he hoped might rally the community around their cause, and he got quite a response. “Within 4 months, we had enough money, not only to get us through the next month but through the next year,” a stunned Fain said. Residents of Jessamine weren’t the only ones who donated to KCAL OTR. Natives of the county who now lived out of state also donated. The donations continue to pour in—from the printed playbills down to the very chairs in the theater—the community’s generous donations make their way to the 501(3)(c) organization.

The KCAL cast and crew are currently celebrating six years of performances in their Hometown Theatre on Main Street in the heart of Nicholasville. They coordinate four performance weekends a year and it continues to be a labor of love for all involved. Two shows per weekend quickly generated the need for more, so now they have four shows each quarter with additional performances added if they sell out—and they usually do. All the money from ticket sales goes back into the general cost of renting the building and running the theater. Though the theater holds just 55 people and is it is the perfect size for an intimate show. They even had a ‘traveling’ dinner theater show last year at the First Vineyard and plan to host another performance there in May.

Upcoming events include a Springtime Fairy Tale Theater April 17-19, 2020, where the Troupe will bring old fairy tales back to life just like the original radio versions were broadcast. They plan on at least four performances that weekend.

But, that’s not the end of the story.

The Jessamine County Old Time Radio Troupe also comes together to support community causes. In the spring of 2019, KCAL OTRT put together a “Gospel Night” at a local church to raise funds for a handicapped-accessible park that was in need of new equipment. Though it was a free event, they passed the offering plate around going on to raise approximately $3,700.

That same fall, they had another “Gospel Showcase” fundraiser for homeless children in the Jessamine County School System who despite their hardships, make it to school. They passed the offering plate again and raised over $5,600. That money provided a Thanksgiving meal at the homeless shelter, purchased shoes and clothing for children who only had flip flops and the clothes on their backs, groceries for a few families who managed to secure a home, and fees for a few children to participate in sports activities.

The members of KCAL OTR are surprised and delighted that they “as KCAL can give back to the community what they’ve given to us,” Fain says.

Someone recently thanked Fain for the ministry that KCAL has within the Jessamine County community. “I didn’t think we’d last past a year, let alone grow into that,” Fain emphatically responds.

“To have it evolve into a ministry, to be known for that…it’s really interesting how this ragtag bunch of Jessamine County people that just wanted to have a good time, doing something that they enjoyed, has grown into a giving organization,” Fain says.